Thanks to the many, many people who expressed concern for Mirk and Gemma. It was most heartwarming to know that, though many didn't know the two GABNet members, it was enough that they were of this sovereign sisterhood.

What's the probability ratio that of the 200 arrested at the latest anti-war actions, two would come from GABNet? It seems to me that that says something about the mettle of this organization.

The two are out and will likely face court hearings. I hope the charges are dismissed.
Posted by Unknown at 11:53 AM No comments: 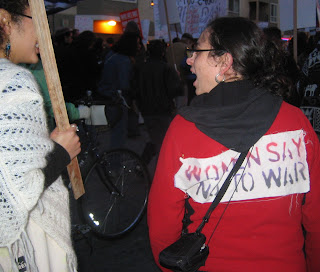 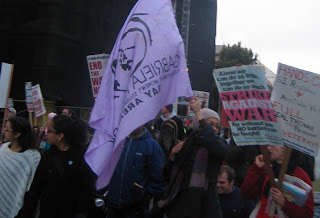 Mirk and Gemma were arrested at the anti-war march in San Francisco on the 19th of March.
Posted by Unknown at 5:30 PM 2 comments:

Sex, Lies & The Gender of Power

New York lost its governor, he who rode to victory on 70% of state votes. Eliot Spitzer, who was reputed to be the scrubber – he would clean corruption out of every aspect of state politics – resigned after revelations of sex trysts with (a) prostitute(s) which reportedly cost him as much as $80,000. Shocked New Yorkers went around for a day or two asking “what was he thinking?” Friend Mirk and I agreed, over phone lines stretched between New York and San Francisco, that it would be more correct to ask “with what was he thinking?”

Actually, when the news first broke out, my immediate reaction was to say “stupid!” Why’d he use his cell phone? Why not a prepaid disposal one? Why not ask his aide to make the arrangements? In other words, my shock came from his inability to finesse the illicit act – in other words, to get away with it, not to get caught. Goes to show that even someone like me who examines her thoughts constantly for “constructs” falls prey to the assumption that among the accouterments of power is sexual access to the object(s) of one’s desire; that a rampant libido is part and parcel of leadership.

The roots of this assumption lie in history, of course, leading back to over 10,000 years ago when sexual dominance over women began humankind’s experiment with large-scale marginalization of portions of itself, and preemption of community resources (including women) based on strength, eventually institutionalized into class divisions based on property. This is one of the basic reasons why power has had a male gender in class society. We can posit as well that power became synonymous with strength, since the idea of dominance was embedded in the hierarchical and quasi-military formations at the beginning of human history. Thus leadership equals power equals dominance, strength and an enhanced libido.

New Yorker shock lasted only a few days and then, former Governor Spitzer became fodder for the worst jokes ever in the political scene. The song Love Potion Number 9 was rewritten to become Client Number 9 – the pseudonym by which Spitzer was identified in court papers when the management of the high-class prostitution ring was sued. Speculation was that “Kristen,” the woman given over $4,000 by Client Number 9, had to take the train instead of flying from New York to Washington D.C. because she was carrying toys. Uh. She’s reportedly making a lot of money from the scandal – underscoring the message of U.S, pop culture to young women: you can have it all by selling yourself.

Despite huge advances in concepts of women’s equality and women’s rights, we still can’t seem to end the view of women and sexual indulgence as accessories of power. Solomon’s harem of hundreds of women was written up as kingly virtue; the emperors of Rome gathered women, men and children for their sexual proclivities, as did the emperors of China. In more recent times, there were the Kennedys, Bill Clinton and that guy who was soliciting congressional pages via text messaging. The irony is that political leaders are brought down by sex scandals in this bourgeois society where women are as much a commodity as anything else. I can’t remember any similar event happening in the socialist bloc, when it still existed. Chiang Ching, the wife of Chairman Mao, allegedly indulged in orgies of drinking and watching Western films with her colleagues in the Gang of Four – but that was mostly rumor. She committed suicide after decades in prison in China.

Some supporters of Hillary Clinton floated the opinion that the Spitzer scandal underlies the importance of gender in the selection of leadership. I tried to recall if there ever was a woman leader who linked power with sex as much as men often do. Catherine The Great, if accounts are to be believed, could fall into that category. But by and large, women of power were more linked to cruelty and excess in spending than anything else. Like Imelda Marcos, who’s just been cleared of money salting, while 10,000 human rights victims of her husband’s dictatorship remain bereft of compensation. The Philippines, it seems, has a long history of allowing injustice to go un-redressed, like the peasants killed at Hacienda Luisita, the thousand activists murdered since 2001, the union leaders killed at various factories…

I would agree to some extent with Hillary’s supporters but for different reasons. First and foremost is the need to de-genderize power. For over 10,000 years, the gender of power has been male; decisive work has to be done to end that. Second reason would be to end the assumption that women are accessories of power and wealth – an assumption that continues the historical objectification of women as possessions or as objects to be conquered. Third reason is that, despite all good intentions, the highest representation of women in government has only been 26% -- and that was in former Soviet Union, China and various governments of the former Eastern bloc. This view that women are to be governed, not to govern, is linked to our historical and social definition of woman. We cannot leave that view unchallenged; part of the struggle for women’s emancipation is the need to redefine what a woman is, should be; indeed to redefine what gender is, socially. Otherwise, we accept the proposition that a woman is she who works for the interests of profit-makers, exploiters and oppressors. The new definition, which we need to uphold in all our actions and pronouncements, must come from the women’s struggle and women’s movement toward their emancipation and the people’s liberation. -- ##
Posted by Unknown at 1:24 PM 4 comments:

Mystic at the Los Angeles IWD 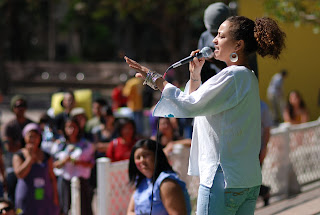 Grammy-nominated artist/rapper Mystic whip up the crowd at the 8th March against the War rally in Los Angeles.
Posted by Unknown at 8:22 PM No comments: 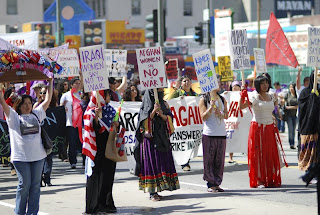 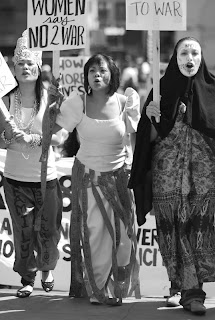 
LOS ANGELES: Thousands of women are expected to march under the butterfly insignia of the Mariposa Alliance and the purple standard of GABNet as the City Council of West Hollywood passed a resolution endorsing this Saturday's anti-war gathering. It will be a historic event for Los Angeles where no women's march on International Women's Day has been held since 1994.


Said GABNet National Chair Dr. Annalisa Enrile: "that women of Philippine ancestry are taking the lead on this makes our community and organizations proud. As Filipino-Americans, we are taking our rightful place in the political discourse of the United States, on issues that impact our lives on a daily basis." The GABNet chair thanked the member organizations of the Mariposa Alliance for their staunch and unwavering support. She also thanked the City Council of West Hollywood and Mayor John L. Duran for "confirming the validity" of women's actions and women's voices on "the burning issues of the day."


The West Hollywood City Council Resolution # 08-3644 is entitled Resolution In Support of International Women's Day: March 8th Against The War Rally." It notes that: "March 8th Against The War Rally serves to unite female activists and groups that usually work on different issues for a common cause." Declaring that the City Council of West Hollywood "has been a vocal opponent against the wars in Iraq and Afghanistan, and has a history of supporting community programming for women's rights," the Council duly passed its resolution of support for the 8th March rally against the war. (see text below)

A RESOLUTION BY THE CITY COUNCIL OF THE CITY OF WEST HOLLYWOOD IN SUPPORT OF
"INTERNATIONAL WOMEN'S DAY: MARCH 8TH AGAINST THE WAR" RALLY

THE CITY COUNCIL OF THE CITY OF WEST HOLLYWOOD DOES HEREBY RESOLVE AS FOLLOWS:

WHEREAS, nearly 4,000 Americans and 1 million Iraqis have been killed since the Iraq War began in 2003; and

WHEREAS, the majority of these victims are, disproportionately, women and children; and

WHEREAS, the "International Women's Day: March 8th Against the War" rally serves as an opportunity to unite female activists and groups that usually work on different issues for a common cause; and

WHEREAS, the march will mark the 5th anniversary of the Iraq War and call for an end to the war and victimization of women in war-stricken countries; and

WHEREAS, no large mobilization of women activists on International Women's Day in Los Angeles has taken place since 1994; and

WHEREAS, West Hollywood has been a vocal opponent of the recent wars in Afganistan and Iraq, and has a history of supporting community programming for women's rights;

THEREFORE BE IT RESOLVED that the City Council of the City of West Hollywood hereby supports "International Women's Day: March 8th Against the War" rally on March 8th, 2008 in Los Angeles.

PASSED, APPROVED AND ADOPTED by the City Council of the City of West Hollywood at a regular meeting held this 3rd day of March, 2008, by the following vote: