My schedule is ruled by an agent with an ironfist. Please email vidaevents@verizon.net.  Or check-out Speak Out Now.  Because of ancient bones and a still rather hectic schedule, my preference is for professional (writing) and political (speaking) activities.  Thank you for your forbearance. 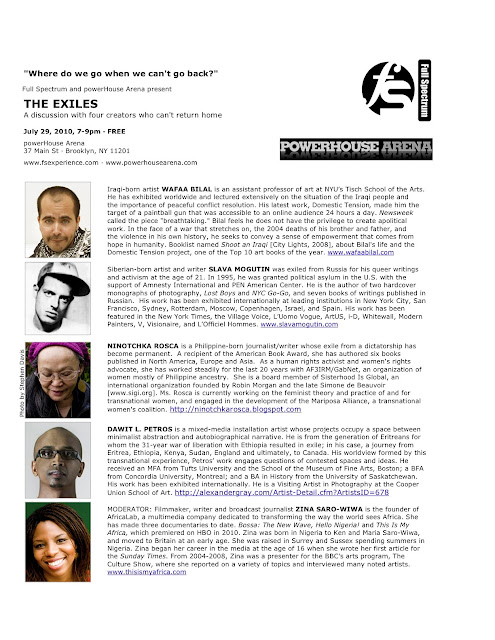 When lead performer Sahr Ngaujah asked the audience at the Eugene O’Neill Theatre “who’s been arrested?” “ Imprisoned?”, Milady and Ollie cast expectant and encouraging looks my way as a few in the audience raised hands.

Later, coming upon the star on the sidewalk, they told him I had been a political prisoner and had wanted me to raise my hand. I said I'd been waiting for him to ask, “Who’s been tortured” – then I would’ve raised my hand. Mr. Ngaujan looked thoughtful and said maybe he should add that to the script. So, WHEN – not if -- you see Fela! and the question is asked, hey, know that it comes from a Philippine experience to become part of a Nigerian story.

Being still in the grip of a massive jetlag – crossing half the globe twice in five days was too much – I had feared I would doze off during the show. Not much chance of that, with all the energy and intensity and, yes, anger on stage. Amazing music, amazing choreography and an amazing life. Mr. Ngaujan brought fire and sincerity to his performance – which was not surprising, as he turned out to be well versed in African politics. When I mentioned Zimbabwe’s new diamond mines, he quipped: “Dig deep enough in Africa and you’ll find diamonds.” Ollie mentioned Sierra Leone’s female foreign minister Zainab Bangura and Mr. Ngaujan, who is of Sierra Leone, said she was doing all right. “She’s negotiating with multinationals – who’ll develop electricity, who’ll do the roads…We have nothing, you know; so she’s seeing who can give us what we need. Later will come the backlash.”

It was a good antidote to my weekend in Poland, at a conference where too much went into attitudinizing and about 90% of the discussion was a regurgitation of old ideas masquerading as new. I’d left Poland thinking about small countries, big tyrannies and then there was Nigeria. And Fela!
Go see the show. -- #
Posted by Unknown at 4:30 AM No comments: