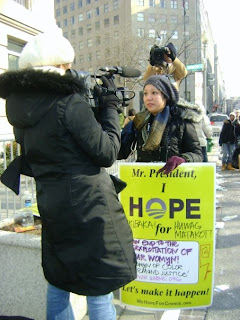 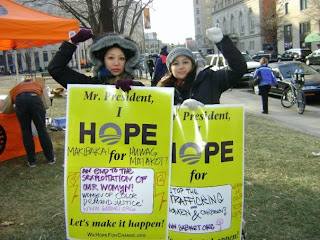 Some GABNet members braved Washington DC weather to deliver their message. Here are two pictures. Click on them to supersize. That's Olivia and Catherine, likely the youngests in our sisterhood.
Posted by Unknown at 2:01 PM No comments:

After Barack Hussein Obama said “so help me God,” I went outside to check if the earth had been rent asunder, trees had fallen, buildings had sat on themselves and the sky had cracked open.

Nothing. Traffic was normal; children were still running around and dogs had their noses to various small shrubs. All I could think of was: well, Saddam, are you roaring with laughter? Huge karma joke, this one…

Then I watched as George W. Bush was led to a helicopter and flown away – which was a relief, considering how much of the past week had been spent spinning his “legacy.” I’m inclined to believe that people who do this are trying to cover up the inescapable sense that they had made a mistake or something had gone wrong with what they’d done.

People who hold power convince themselves it will last forever. They should read Shelley's Ozymandias: Round the decay/Of that colossal Wreck, boundless and bare/The lone and level sands stretch far away… #
Posted by Unknown at 1:48 AM 3 comments:

The pale moon ruled over my last three nights in Hawaii, laying a magical veneer over an already perfect landscape. As I watched it from the 25th floor lanai (balcony), I wondered if it was refusing to shine over Gaza, so as not to witness a continuing inhumanity of human beings upon human beings.

Years ago, I used to wonder how Israel could do what it was doing to the Palestinians, or even to ally itself with the apartheid government of White South Africa – but since then, I’ve seen the abused take on the persona of the abuser – prisoners doing the guards’ work, women maligning other women – all to align themselves with brute authority. Underlying the repetitive cycle of violence is survival at all costs – and Israel has bluntly used and overused this to justify the most extreme measures taken against a people whose land and patrimony it expropriated in successive acts of violence.

The siege of Gaza underscores the senselessness of what has gone on with the Palestinians: the assault began for no reason, continues with no clear far-reaching objective and ends without any goal reached. Population control, perhaps?

For the last 50 years, Israel has gotten away with this by stoking the guilt feelings of the West by elevating victimhood as the hallmark of its history. The Germans, if for nothing else, owe the Palestinians a great debt of gratitude for having taken their place as villains in Israel’s self-image as victim and for enduring collective punishment for a Holocaust they did not commit.

Deeper still, behind all these surface relationships, lies the Bush administration’s determination to leave as much of a mess as possible for the new political leadership. Make no mistake about it: this was Bush’s last war. Israel would not have embarked on this silly adventure without a go-signal from the US government. It was a last flip of the finger to the people of the US – to the millions who marched against the invasion of Iraq and those who now march against the siege of Gaza.

There are those who leave an office or a residence neat and clean, ready for the next occupant; there are those who improve on what they find and leave behind potential for even greater achievement; and there are those who make sure that they’ve thoroughly messed up the terrain so that it would be impossible to accomplish, much less change, anything. Legacies are determined not simply by accomplishment but what doors have been opened, what new pathways have been created, what possibilities have been made clear… Bush’s legacy is a complicated political terrain that leaves his successor very little maneuverability.

The old leadership refuses to let go while the new hasn’t crystallized a vision for how it will govern. And we are all held hostage at this between the intake of breath and its release.