Been spending time with a group of young women in Hawaii trying to unravel the thorny points of class, gender and sexuality;  of nationalism, regionalism and transnationalism;  of language and literature;  of what constitutes the politics of women in this age of globalization.  One asked what my writing process was -- and strangely enough, I'd been thinking about it -- for the long work specifically, since I tend to go on automatic with short pieces, sitting down and after hours of barely eating or sleeping, getting up only after the last punctuation.

A long work often begins with an image, an idea, an event -- which becomes like a train ticket that I tend to place in a desk drawer somewhere in the writing room of my mind and try hard to forget -- until the day I can no longer procrastinate and open the drawer, pick up the ticket and embark on the journey toward another world, where I am another person.  I don't much like it, because it means going through the tribulations and stresses of a lifetime within a year or two;  and also because as I become the character and that world, my world, I resent intrusions from reality and become anti-social.

That is the process -- a journey through an unfamiliar and yet familiar universe;  where I am both main character and all characters at the same time and yet remain in total control of the evolution of events toward an end of which I have no inkling.

How does one explain that to the subject of one's writings?

I am often tempted to snarl, "leave me alone -- I'm not interested in the present you but you as a sum total of your past."  Interested in what has been shaped, not in what is being shaped.  Not interested in your current crises but rather how these came about and what could possibly result from them -- mainly because every tale must have completion, even if that completion is also the beginning of another paradigm.

In quantum physics, one sees what one is looking for only after it has gone.

Recently, when faced by the difficulty of explaining such a conundrum to non-writers, I find myself hoisting my Nikon and taking photographs -- probably in an attempt how this freezing of the instant, the stopping of time, is so important to my writing process.

Here's a photo I took on the night of the full moon, 21st December, from the 25th floor of a building in Honolulu.  I call it Darkness Visible.  Click on photo to supersize. 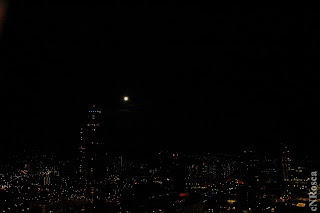 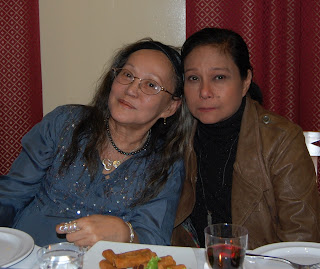 Hurry to the Wedding 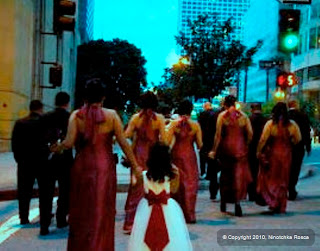