Through the Plains and Back 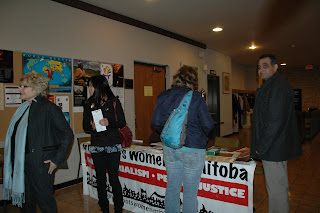 The cold came on my last day in Winnipeg, riding blustery winds, reminding me that all my socks were mismatched pairs, and so Fagie and I hied off to a mall on the way to airport. It seemed a logical thing to do at the time, despite my exhaustion, as my nights were plagued with bad dreams, ever since I learned that certain elements were saying that organizing women and women’s centers was akin to setting up cults or a cult. All the work of women should be, according to the new inquisitors, erased – burahin, burado, bura, bura, bura – the viciousness of the word like a whiff of smoke and ashes, engendering memories of witches burning, millions of women tortured, Sisa driven insane and Maria Clara chased to a nunnery’s rooftop by a lust-driven Padre Salvi. I was prepared to be lynched when I gave a talk on the patriarchal surge which I characterized as partly occasioned by the epidemic of selling women as trade goods all over the world…

One reads about how the women have been deprived of historical signification but it’s something else when one watches it in the 21st century.

I flew to Winnipeg barely 24 hours after flying home from Davenport, Iowa, where the Ambrose Women for Social Justice had held its annual conference, this time focused on trafficking. Attendance was over what the women had expected, the discussions lively and interesting. People were interested in doing more even beyond the conference. My central thesis was that trafficking does not take place in a vacuum; that it rests solidly on feudal-patriarchal foundations that view women as disposable, replaceable and interchangeable, a view that capital uses to transform women into trade goods and cheap labor, for the maximization of profits that is a pillar principle of imperialist globalization.

That is not too difficult to understand, is it?

And therefore, to eradicate such afflictions, one must dig deep to uproot patriarchal and feudal values and perspectives, as well as oppose and struggle against imperialism… That’s not too difficult to understand either, is it?

In any case, I almost missed going to Winnipeg, Canada, because I had it in my mind that, having reached New York from Iowa on a Wednesday, I would have Thursday free to decompress and prepare, but sometime in the evening, I get a call from Canada and this very sweet voice tells me that she’d pick me up at the airport on the morrow. OMG! I checked my ticket and sure enough, I was due to leave the following day. My little luggage ($15 to check it in at American Airlines) had gone astray, with all my good clothes in it… I spent two hours rummaging for another suitcase and serviceable clothing. I wish the RNC had taken a buck or two off Sarah Palin’s clothing allowance to get me a new pair of jeans.

Of course, the plane from Winnipeg to Minnesota was delayed and I had only 15 minutes to make it from one gate to the other, to catch the last plane to New York, running and praying I didn’t destroy the painting Grassroots Women had given me; I made it at last boarding call but my second suitcase didn’t. Oich vech!

But Fagie’s home was really gorgeous, of the Bauhaus architecture, which meant glass windows all around, so the four seasons moved light and shadow through the house. It’s as close to living in the open as one can get without the inconvenience.

At home, I find the TV full of Barack Obama, who seems to have a thousand rallies going on, on top of doing a million interviews. He’s really tanned, red brown, probably from all the outdoors campaigning, what we call in Tagalog kayumangging kaligatan, a most prized complexion. I never did find out what kaligatan meant, never having heard it linked with another noun, but I presume it means pristine, pure, deep… The intensity of this campaign is delineated by the creep of gray through his hair, more now than two years ago. Appearing with Bill Clinton at a midnight rally, Obama appeared nervous, made two mistakes in his speech (A top McCain aide admitted that if we continue to talk about the election… should’ve been “the economy”) and looked really exhausted.

These elections are becoming ever so amusing, what with all the talk about socialism, re-distribution of wealth, Marxist, communist, terrorist, etc., – subjects rarely addressed in US politics. Jon Stewart asks whether, should Obama win, it meant the electorate approved of socialism? Hmmmm.

I hear “women’s rights” enunciated in speech after speech, on par with all other rights, and I wonder whether it will take another thousand years before we of Philippine ancestry will hear a man of our people say that with due sincerity. I glance at Obama, note the dark circles under his eyes, and say “there’s a chasm between intent and implementation, always!”

At the Winnipeg talk, an immigrant (not sure, could’ve been on student visa) from Africa stands to excoriate us for critiquing Sarah Palin. Women shouldn’t speak ill of women is his thesis. Then he launches an excoriation of Barack. Fortunately, others set him straight and tell him that he’s contradicting himself. I have to step on my tongue figuratively to keep from saying “a black man can critique a black man but an Asian woman should not subject a white woman to analysis; let’s be mindful of how colonialism has defined for us what’s due one sector of the population versus what’s due another.”

And how were your last two weeks?
Posted by Unknown at 11:03 AM

I found this site using [url=http://google.com]google.com[/url] And i want to thank you for your work. You have done really very good site. Great work, great site! Thank you!